Kanban – what exactly does it mean?

When talking about Kanban, there are actually three definitions. This creates confusion as the three meanings are often interchanged or misunderstood completely.

Firstly, there is the word Kanban. This is a Japanese word (a noun) which loosely translates to “signal card” or “signpost”.  Essentially the word is used to describe a physical sign which conveys some information. The word has been around in the Japanese lexicon for a long time, well before Toyota started adopting it to describe the just-in-time pull systems they developed as part of their manufacturing process. This leads to the second definition…

Kanban Systems were first developed by Taiichi Ohno, an industrial engineer at Toyota, way back in the 1950s. Following a trip to the U.S., he was inspired by how supermarkets could order just enough stock to replenish the goods that customers had purchased, thereby keeping an oversupply of stock to a minimum.

In the 1950s, Toyota competed with large U.S. companies Ford and General Motors. These well-established and wealthy organisations could afford to have an oversupply of stock in storage. However, Toyota could not!  They needed to find a way to maintain a steady flow of stock which arrives just at the time when it is needed, thereby reducing the need for expensive unused stock sitting in warehouses.

Naturally, in Japanese, a physical card that conveys some information is known as a Kanban, and so Kanban Systems were born. But there is more to it than that.

As the card travels “upstream” in the manufacturing process, it is actually a “pull” signal indicating that the downstream part of the system is now ready for more items. So in a Kanban System, the upstream pull signal is the Kanban – it is NOT the item flowing downstream!!

Therefore, a Kanban System is a system where Kanbans (pull signals) are in circulation. And it so happens that Kanban Systems are used more often than we may think.

One of the great benefits of a Kanban System is it protects the entity that issues the Pull signal from overburden. Imagine our manufacturing process again and its box of parts. Just imagine that instead of one box arriving, twenty arrive instead.  The station consuming the parts would be “overburdened” with excessive boxes of parts. This may not be a big deal in this example, but there are other situations where the overburden is a problem.

The Palace Gardens in Tokyo is such an example. It is a walled ornamental garden which is popular with visitors.  However, in springtime, the cherry blossom attracts more visitors than the garden can accommodate.  If all these visitors were allowed into the garden, it would cause excessive damage and not be a pleasant experience. To prevent the garden (the system) from too many visitors (overburden), a simple system is in place.  As visitors arrive, they take a card from a stack of cards located at the entrance gate. The number of cards available corresponds to the number of visitors the garden can comfortably accommodate. Once all the cards have been taken, no more visitors can enter the garden until an exciting visitor relinquishes a card.

Therefore we have a Kanban System in place.  The system being protected from overburden is the garden. The cards are Kanbans because they are a Pull signal indicating the garden can take more people.

Finally, the 3rd definition of Kanban is The Kanban Method – the “agile” method used to manage knowledge work. It is the method that is compared to Scrum and often (and incorrectly) seen as an alternative!

The Kanban Method uses visual models, often depicted as boards (but not always), to visualise the current working system. And because cards are used to depict the items of work flowing from left to right (or downstream), the association is made that the cards are Kanbans. They are not!!!

It is a popular misconception that Kanban (i.e. The Kanban Method) is placing sticky notes on a wall and placing them into columns such as To Do, Doing and Done. Hey presto, a Kanban Board. But there is more to it than that.

In order for The Kanban Method to have a Kanban System in place, there need to be upstream Pull signals in circulation.  This can only be achieved by limiting the number of Kanbans in circulation. 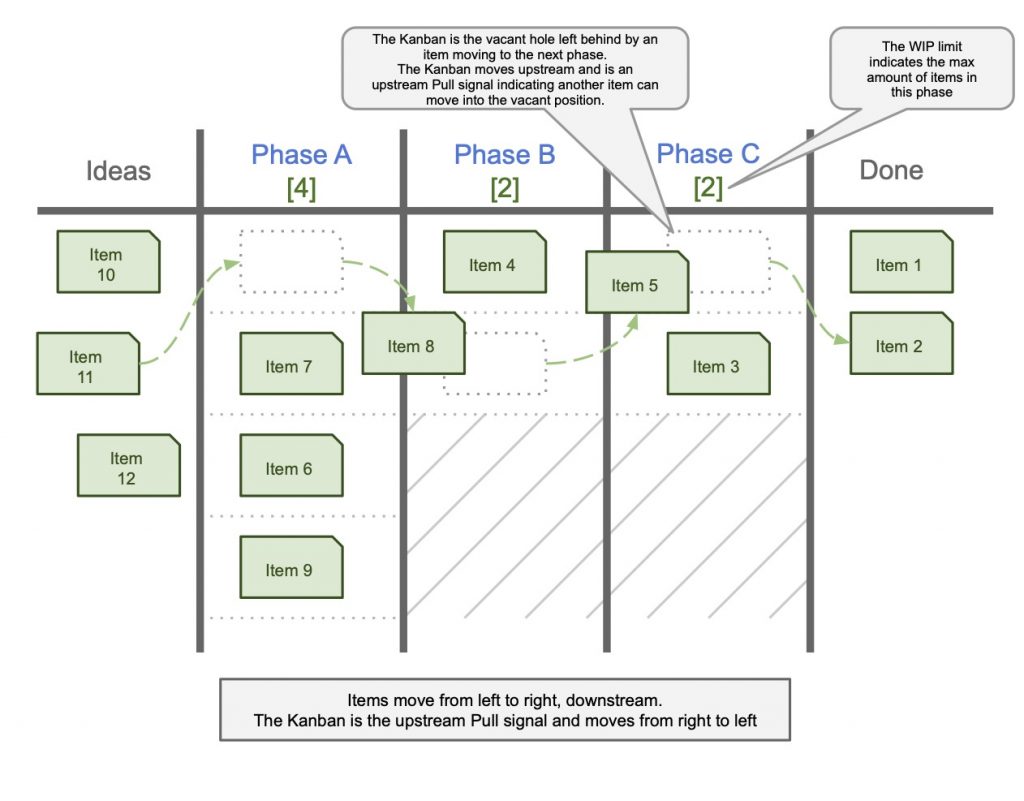 This vacant position which moves upstream, is actually the Kanban. It is an upstream Pull signal indicating the current phase can take (or Pull) a new item.  And these upstream Pull signals can only be achieved if the system has a limited amount of vacant slots. In this example a total of 8 items can only be on this system at any one time. In Kanban System, we call these limits, WIP limits.

So in essence there are three definitions when referring to Kanban. The Japanese word (noun) meaning a signal card. Kanban Systems, where Kanbans (upstream Pull signals are in circulation), and lastly, The Kanban Method. The management method for managing knowledge work by using Kanban Systems to protect from overburden, amongst other things.

Sign up for one of our Certified Kanban courses here:

Go to Top
We use cookies on our website to give you the most relevant experience by remembering your preferences and repeat visits. By clicking “Accept All”, you consent to the use of ALL the cookies. However, you may visit "Cookie Settings" to provide a controlled consent.
Cookie SettingsAccept All
Manage consent

This website uses cookies to improve your experience while you navigate through the website. Out of these, the cookies that are categorized as necessary are stored on your browser as they are essential for the working of basic functionalities of the website. We also use third-party cookies that help us analyze and understand how you use this website. These cookies will be stored in your browser only with your consent. You also have the option to opt-out of these cookies. But opting out of some of these cookies may affect your browsing experience.
Necessary Always Enabled
Necessary cookies are absolutely essential for the website to function properly. These cookies ensure basic functionalities and security features of the website, anonymously.
Functional
Functional cookies help to perform certain functionalities like sharing the content of the website on social media platforms, collect feedbacks, and other third-party features.
Performance
Performance cookies are used to understand and analyze the key performance indexes of the website which helps in delivering a better user experience for the visitors.
Analytics
Analytical cookies are used to understand how visitors interact with the website. These cookies help provide information on metrics the number of visitors, bounce rate, traffic source, etc.
Advertisement
Advertisement cookies are used to provide visitors with relevant ads and marketing campaigns. These cookies track visitors across websites and collect information to provide customized ads.
Others
Other uncategorized cookies are those that are being analyzed and have not been classified into a category as yet.
SAVE & ACCEPT